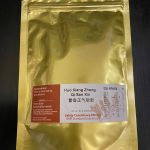 The pattern of conditions Xiao Chai Hu Tang deals with is known in Traditional Chinese Medicine (TCM) as Shao Yang Syndrome or Lesser Yang Stage disorder. Traditionally, this means that an external pathogen has penetrated the body (such as a cold) but was not released properly or completely. The pathogen then sinks deeper into the body, becoming stuck in the level described as in-between the interior and exterior energetic systems. According to TCM, this “half-interior, half-exterior” level corresponds primarily with the Gall Bladder and Liver organs/meridians. Typical presentations of this pattern include alternating fever and chills, chest and rib-sides fullness and discomfort, a bitter taste in the mouth and dry throat, reduced appetite, an urge to throw up, and irritability.

Many of the above signs indeed reflect disharmony of the Liver and Gall Bladder systems. Today, Xiao Chai Hu Tang is often used for diverse biomedical conditions as long as they fit into the so-called “minor bupleurum” TCM pattern.

Xiao Chai Hu Tang consists of seven herbs. The chief Chinese herb, Chai Hu (Bupleurum) is an important herb for treating irritability due to Liver Qi stagnation. Chai Hu is cooling and soothes the Liver with an ascending action that prevents the pathogen from penetrating further into the interior. Here, Chai Hu is combined with Huang Qin (Scutellaria) which aids in draining heat from the Liver and Gall Bladder system and vents pathogenic influences. Together, these two herbs have a powerful calming effect.

Zhi Ban Xia (prepared Pinellia) and Sheng Jiang (Ginger) work together to harmonize the middle burner (Spleen/Stomach) by transforming phlegm, directing rebellious Qi downward, stopping nausea and improving appetite. Dang Shen (Codonopsis) is a powerful Qi and Blood tonic that assists in expelling pathogenic influences by restoring the body’s own constitutional strength. Da Zao (Jujube) and Gan Cao (Licorice) harmonize the bitter properties of some of the other medicinals in the formula and also mildly assist Chai Hu.

Together, these seven herbs have a remarkable synergistic effect that can be applied to a wide range of clinical presentations.

Ingredients
THE PICTURE ON THE BOX